The Tahiti-Moorea Marathon was founded in 1988 by Michel LOURIE, regional technical advisor of athletics in French-Polynesia.

In 2000, the Ministry of Youth and Sports became in charge of the organization of this race. In order to attract a lot of people to this event, the races were scheduled in the afternoon.

On the other hand, efforts are made for bringing more activities and side-events for example with a concert and a fireworks. In 2001, a new race for high school and junior high school students has been added to the event : the relay marathon organized by ASSP. Then it was the turn of the USEP to bring another race for children of the primary schools.

In 2003, a marathon village opened its doors from 8 to 16 February on the public beach of Temae with various local activities. A new team took charge of organizing the Tahiti-Moorea marathon : the Moorea youth and sports branch and the Te Moorea Club Association. The team receives the help of all partners and sport associations of the island.

For the first time in its history, the Tahiti-Moorea Marathon is entirely managed by residents of the island. 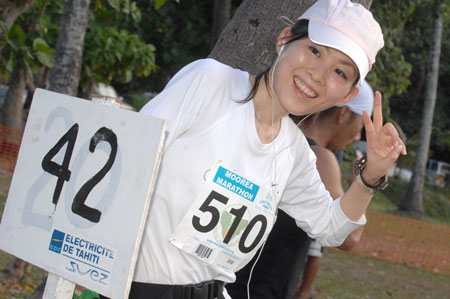 In 2005, the team aims to promote the Moorea marathon sport event at an international level. They launched promotional campaigns in Paris, Monaco, London, Las Vegas … In 2006, our board of directors wanted to develop closer connections with the enthusiasts of running who are located in France. Two major trips were scheduled in Paris and in the Drôme department.

The first trip was led by Angéla Tom Sing Vien, coordinator of events in charge of international relations in April, at the Paris Marathon. She was accompanied by the first deputy mayor of the Municipality of Moorea-Maiao, Mr Joel Hahe, and brothers and sister Maruhi. An ambitious promotion at an event where 32 000 runners took place on the starting line in Paris. The team won the second prize for the most beautiful exhibition stand at Versailles. 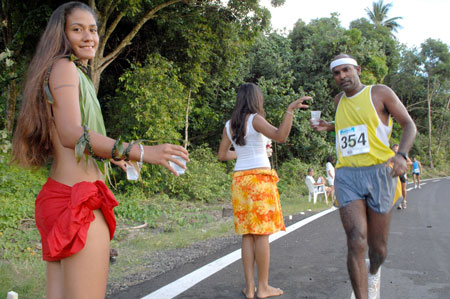 The second trip was led by Mr. Alain Nardi, organizer of the Moorea Marathon, accompanied by Mr. Teriitepaiatua Maihi, Mayor of the Municipality of Moorea-Maiao. Together they established a partnership with Mr. R. Ladent and Mr. J. Peyrard, organizers of the Hero Drôme et Nature Marathon on 13 May in the presence of Mr H. Mariton, Deputy Mayor of Crest, Mrs G. Mahotu, Committee of tourism of Moorea and Mr. J. Gorce, president of the tourist office of Crest. This partnership aims to promote a rapprochement of sports events, to encourage exchanges between French Polynesia and France, to promote the development of our new generations with the sport and competitions.

In March 2008, following a renewal of the municipal council, the municipality expressed its support for the continuity of the project during the mandate of the mayor Raymond Van Bastolaer.

In November 2014, the Te Moorea Club association takes charge of the management of the event by preserving the partnership with the Municipality and the Ministry of Youth and Sports.

In April 2016, the management of the event is entrusted by the Municipality of Moorea-Maiao to the Moorea Events Association who took the challenge of organizing a memorable event in just a few weeks of work with an exceptional date of Saturday, June 4, 2016 for the 2016 edition.